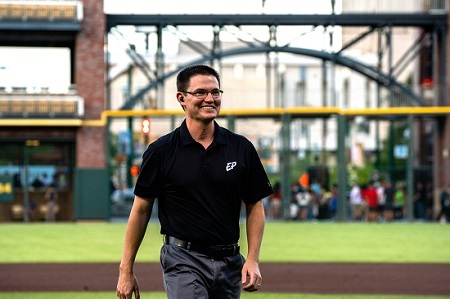 Tim Hagerty is the broadcaster for the El Paso Chihuahuas (Padres Triple-A affiliate) and has called professional baseball games since 2004.

In the off-season, Tim has provided national on-air updates from football and basketball games for Fox Sports Radio. The Massachusetts native was selected to broadcast two Triple-A All-Star Games and a Triple-A National Championship Game on Westwood One.

He's the author of a baseball book distributed by Simon & Schuster and has written hundreds of baseball history articles for Baseball Digest, Sporting News, The Hardball Times and other publications.

Tim's work has been honored with national Edward R. Murrow Awards and by the Alabama Associated Press, Idaho State Broadcasters Association, Vermont Associated Press, the Society for American Baseball Research and the Society of Professional Journalists. Tim was voted El Paso Sportscaster of the Year in 2014, 2015 and 2016. Baseball America named him an MLB broadcast prospect in its Best of the Minors feature.